Book 3 of THE CONTRACT thriller series 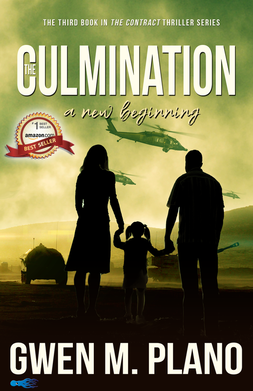 I'm pleased to announce the publication of The Culmination, a new beginning. It can best be described as a political/military thriller. Tackling difficult topics such as denuclearization, the power struggles over oil in the Middle East, as well as the ever-present threat of war, the action is non-stop. Readers will find themselves sitting with the Joint Chiefs of Staff, walking in the historic Red Square, and laughing with children in an orphanage in Turkey. They will glimpse the horror of war and watch the give and take of a negotiated peace. Readers will also meet the two Heads of State who fall in love and subsequently commit themselves to creating a world in which all are family.

I never expected to write this book, but in some ways, I had no choice. The characters crowded into my office and insisted that I listen to them. In a very real way, they wrote the book. I simply tapped the keys.


BLURB:
The Culmination, a new beginning is the third book in The Contract thriller series. After an assassination attempt on an Air Force base in northern California, tensions mount. Heads of state meet to craft a denuclearization agreement. The meetings between these nuclear powers take a murderous turn. A nefarious conspiracy re-emerges and leads the characters into the heart of the Middle East, where they encounter the unexpected and find a reason for hope.

For a quick glimpse of the book, check out the trailer, produced by the Fresh Ink Group.
​Early Reviews:

"I describe The Culmination as a political thriller with a strong military influence. There are many challenging situations presented in the plot by the author Gwen M. Plano. These situations are designed with action in mind and are very intriguing. The worldwide stage on which these situations play out serves to keep the reader riveted to the end. This story is a continuation of The Contract Thriller series and does reflect the title. It almost feels as if this book has been the end goal of the other two. I have read all three and can say that a reader must not have read the other two to enjoy this one thoroughly.

The scope of the plot is vast. The reader moves from what appears to be simple situations of trouble to complex machinations that could lead to World War Three. The story involves multiple nations and heads of state. There are some surprising moments, as well as a tender love story.

If you like a book with plenty of action, compelling characters, political intrigue, military maneuverings, and a compelling love story, this one is for you."
~  ~  ~
​
"There is a powerful message within the plot and the intensity builds with hauntingly current and realist events. Loved it!"

~  ~  ~
​
"If readers like their thrillers written by a celebrated and deft author's hand who can craft her scenes with intensity and give the readers a rushing itch to get to the following culminating pages, who can take you from a Northern California assassination attempt to edgy 'De-nuclearization ' meetings with murderous implications, who can transport you from California to the Middle East for an evil conspiracy and more 'cloak and dagger' excitement. The author to whom I refer is Gwen M. Plano... You will want to read this book."

“The Culmination” is the third book in the Contract Series. I loved all the books, but this one topped them. It touched me on a level of reality and fear, bringing the idea of hope in our current cold social climate. It starts after the second book and an assassination attempt. There is a group determined to cause mayhem and stop anyone in their way, including heads of state. There's not only exciting action but developing relationships and political intrigue. I found a lot of what was going on in the story relevant for current times. Where Ms. Plano took this story is a place where I could imagine the right things being done in the middle of chaos. I loved the American Vice President with her logic and heart. Beautifully written and thought-provoking with scenarios all too familiar, some heartbreaking, and some tender. This book not only scared me but offered an optimistic option at the same time. I highly recommend it and the whole series."